How COVID 19 Lockdown Affected Our Cats

Your feedback: In a few words...

From initial lockdown restrictions, to re-openings and adaptations, we’ve all faced a lot of change through 2020 and 2021. But it’s not only humans who had to adjust - our feline friends have also had to adapt to a new way of life!

Spending more time with their humans, adapting to home improvements, and changes in routine don’t always come easy to our feline friends. They are creatures of habit!

So how has the COVID-19 pandemic affected our cats?

To find out, FELIWAY conducted two surveys (in 2020 and 2021), exploring how owners felt their cats were coping during the pandemic. The first survey was conducted in April and May 2020 across cat lovers in France, Italy, Germany, Spain, the Netherlands and the USA. The second survey was conducted in May 2021, and included all of the countries above as well as the UK.

We’d like to thank all the participants who took part in our surveys for sharing their kitty insights with us!

How have households changed?

The number of people in the home was similar across the countries surveyed, with the majority of households surveyed including 2 people. Quite a few households also decided to welcome a new furry friend into their family during the Covid-19 pandemic situation - with 22% saying they’d welcomed a new pet. 87% answered that they got a cat during this period and 10% adopted a dog!

How has your relationship with your cat changed?

Respondents in Italy and Spain noted the most variation, while the UK and USA continued to spend similar amounts of time with their cats throughout this time.

How has the pandemic impacted your kitty?

The pandemic hasn’t just been stressful for humans - it has impacted our four-pawed companions too!

In response to our 2020 survey, 14% of respondents said that the pandemic had probably been stressful for their cat(s), and 6% were sure that it has definitely been a stressor. However, it seems that kitties may have started adapting to having their humans at home more as, in response to our 2021 survey, just 6% thought it has probably been stressful for their feline companions and 4% felt it definitely had.  Both surveys showed that 10% of people surveyed weren’t really sure if their kitty was feeling the impact of the pandemic situation or not.

Perhaps understandably, cat parents felt that the most stressful impact of the pandemic on cats was the changing routines - if there’s one thing cats don’t like, it’s change!

What could be making cats stressed?

We delved deeper into the ways changing routines can be stressful for kitties, asking respondents which factors they think made life stressful for their furry friends during the pandemic. In response to our 2021 survey, 44% of respondents felt that it was their own changing routine that had caused kitty stress, while 45% felt that it was the difference to their cat’s routine. This was even higher in our 2020 survey closer to the start of the pandemic, where 74% felt that their changing routine was causing their cat to feel stressed.

Around ⅓ of kitty parents surveyed have seen a change in their kitty’s behaviour since the start of the pandemic! In our 2021 survey, the UK and USA in particular had a high percentage of respondents answering “yes” to this question - 40% in the UK and 36% in the USA. Overall, 54% of respondents to the 2021 survey felt that the level of restrictions during the pandemic had an impact on their cat’s behaviour or well-being.

Some of the more prominent changes that people noticed included:

Lower numbers of cat parents had also noticed that their kitty was grooming more, had become afraid of noises, was hiding, scratching furniture, or fighting more in multi-cat households - all signs that your kitty may not be completely happy.

We also asked if the duration of the pandemic has impacted cat’s behaviour (i.e. got better or worse with time), to which: 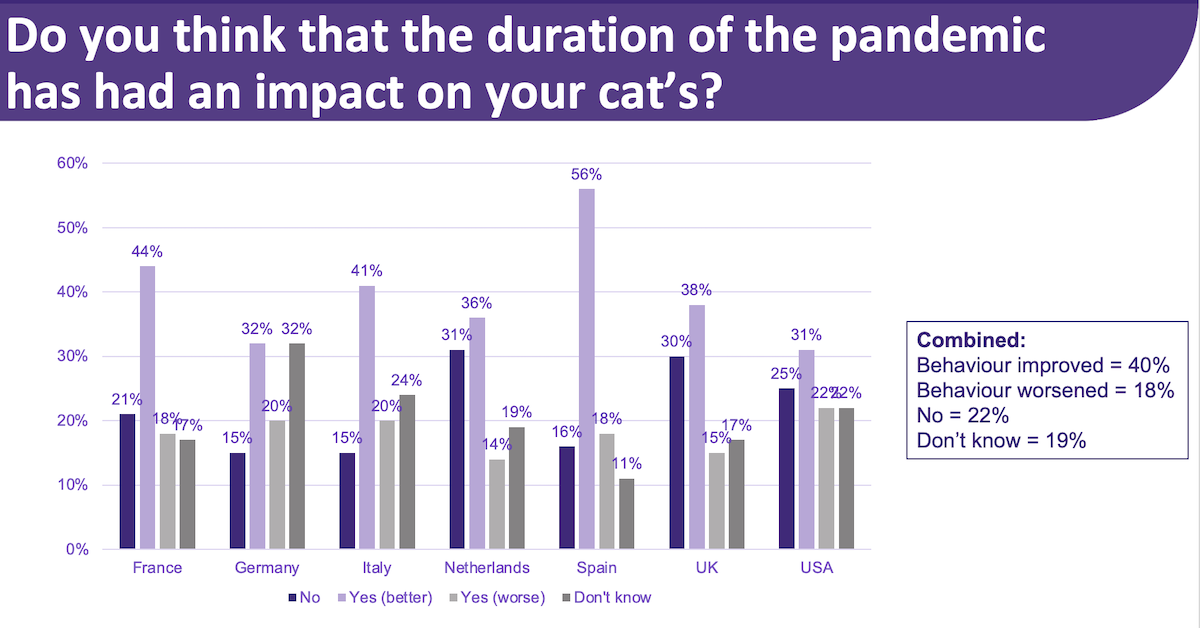 Unpacking the reasons for cat stress and what causes cat stress

During national lockdowns, working from home meant that it was easier to give more attention and food to feline friends, and have more time for play or cuddles - which explains why cats were more likely to become closer to their human family - being more “clingy” and affectionate.

However, this change to routine was also unsettling to some cats. Children spending more time at home with home-schooling also meant more noise and activity around the house, as well as less space in the home, which could cause kitty stress.

Then when restrictions were lifted slightly, and people were returning to the office at different times, cats have found it difficult to adapt after growing used to having lots of time with their human companions. People working in key industries such as hospitals or shops also faced increased workload and longer hours, meaning that their kitties also had a change of routine. As we mentioned earlier, many surveyed welcomed a new pet to their family which can also be a cause of anxiety for cats.

Did the use of FELIWAY change during the pandemic?

According to our survey, 27% of respondents used FELIWAY at home during the pandemic in 2020.  This increased to 41% in 2021. The April/May 2020 survey showed that 50% of users had started using FELIWAY in the last month to provide comfort to their cats. However, our 2021 survey showed longer-term use, with 84% of users having used FELIWAY for 1 month or more - in fact, 32% of respondents had been using the FELIWAY for more than 6 months.

The most popular product across all countries surveyed was FELIWAY CLASSIC (62% of respondents used this); FELIWAY FRIENDS was used by 25% of respondents.

17% of FELIWAY users also reported changing the FELIWAY product they used during the pandemic. Reasons for this included:

How are cat owners helping cats?

As well as 64% of respondents to our most recent survey stating that they felt FELIWAY use was probably or definitely helping their cat at home, kitty parents are trying to help their cats feel less stressed in several ways. 77% of respondents are using additional techniques to FELIWAY, such as spending time playing with their cat, buying new cat toys and puzzle feeders, increasing outdoor access, adding kitty resources to the home, and ensuring their cat has enough hiding places where they can retreat for some alone time.

However, 25% of respondents to our most recent survey felt that the return to “normal” would ‘probably or definitely’ be difficult for their furry friend. To continue supporting their kitty, 47% will continue or start using FELIWAY, 51% will play with their cat more often, and 42% will try to be at home more often.

Being aware of how your kitty feels in response to change and ensuring that you can spot signs of cat stress so that you can take action, is key to keeping your cat calm and content. Read more about preparing your cat for end of lockdown and together, you can create the purrfect calm kitty home and build your bond!

How Happy is Your Cat? Take the Quiz!

Complete this short quiz to find out "How happy your cat is?". If not completely happy we will send ...

Cats During Lockdown: A Survey by FELIWAY

The coronavirus pandemic has impacted and changed our everyday lives. In many countries citizens ...

Do cats hate water? The answer to this question is – it’s both true and false!