Feliway US Blog
A Kitty's Point of View: Who Are All These Other Cats?

A Kitty's Point of View: Who Are All These Other Cats?

‘Miaow! Let me Introduce you to my Kitty Family!’

I have a pretty purrfect kitty family! There’s me, my furry brother and our human parents; who decided to adopt us both! However, while we’re getting used to having humans around, there’s also another cat somewhere in the house… who are they!?

Because we were littermates (we’ve known each other since before our eyes were open!) me and my brother get on quite well, but I’m not so sure about the other cat I’ve seen. Her name is Cassie cat, she’s a bit aloof and likes to sit on a high shelf staring down at us!

I'm still learning about Cassie, but the staring does make me feel that she doesn't want us here. Cassie was here when we arrived.......maybe she's a bit stressed as we're the new cats on the block and she doesn't want to share her space - her staring makes me feel uncomfortable and so I am staying away from her when I can!

My brother and I like playing together and we love snuggling up on the sofa; we also help each other groom - he can reach the bits that I can’t, like just behind my ears, and it’s quite relaxing. It feels just like it did when our Mummy cat used to groom us when we were tiny kittens. It made us feel happy together and we became good friends (I think it’s called bonding in human language!). 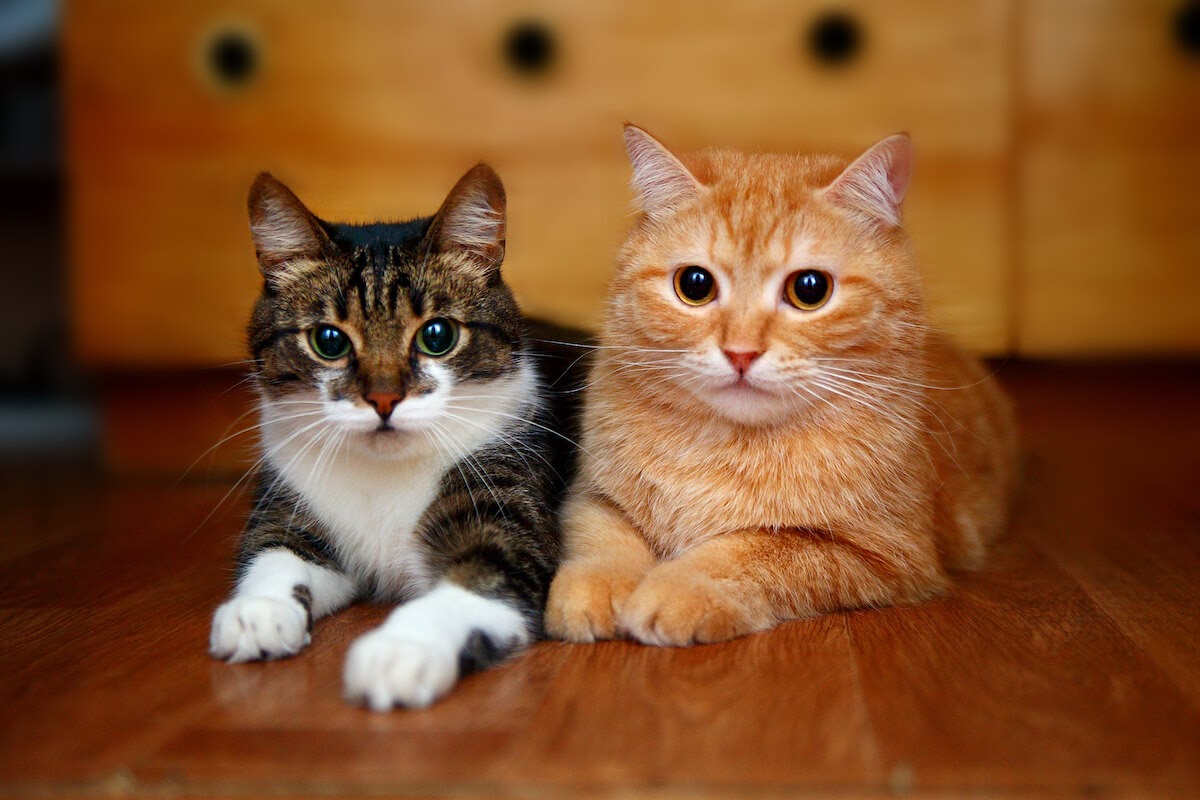 Cassie cat isn’t sure about sharing… yet!

When it comes to bedtime, I like my own bed, though I don’t mind sharing with my brother! Cassie cat doesn’t seem to like it if any other cat tries to sleep in the same space as her! Maybe once we know each other a little better she’ll come around to the idea, it really can be very cozy!

Because my brother and I are bonded, we don’t mind sharing some things (like toys) and the occasional nap space! But when it comes to food & drink bowls and the litter tray - we all like to have our own individual resources.

Our human parents have been good at diffusing the tension between Cassie and us two kittens. I expect they researched very carefully before they brought us home and realised that us cats like to have our own space!

Did you know that when we cats want to mark our home territory we rub up against things? Humans can’t smell it, but we cats can! That’s how my brother and I know how to stay clear of where Cassie cat likes to spend her time! She’s not quite sure of us yet (we’ve only been here a little while) and she wouldn’t be pleased if I tried to get into her bed or strayed into her space!

I hope we’re good friends one day though! We’ve only been here a few weeks so I expect Cassie may think that we’re trying to take over her space. She is always watching what we’re doing... I think, secretly, she may want to join in our fun! One day she might!

At the moment our human parents only let us be in the same room when they are watching. When we first met a few weeks ago, Cassie cat did sniff us, but then she hissed a little and left the room. The next time, she stayed around a little longer - and I saw our human parents give her a treat for staying calm - so maybe we will get along in time. I think we just need to get used to each other. 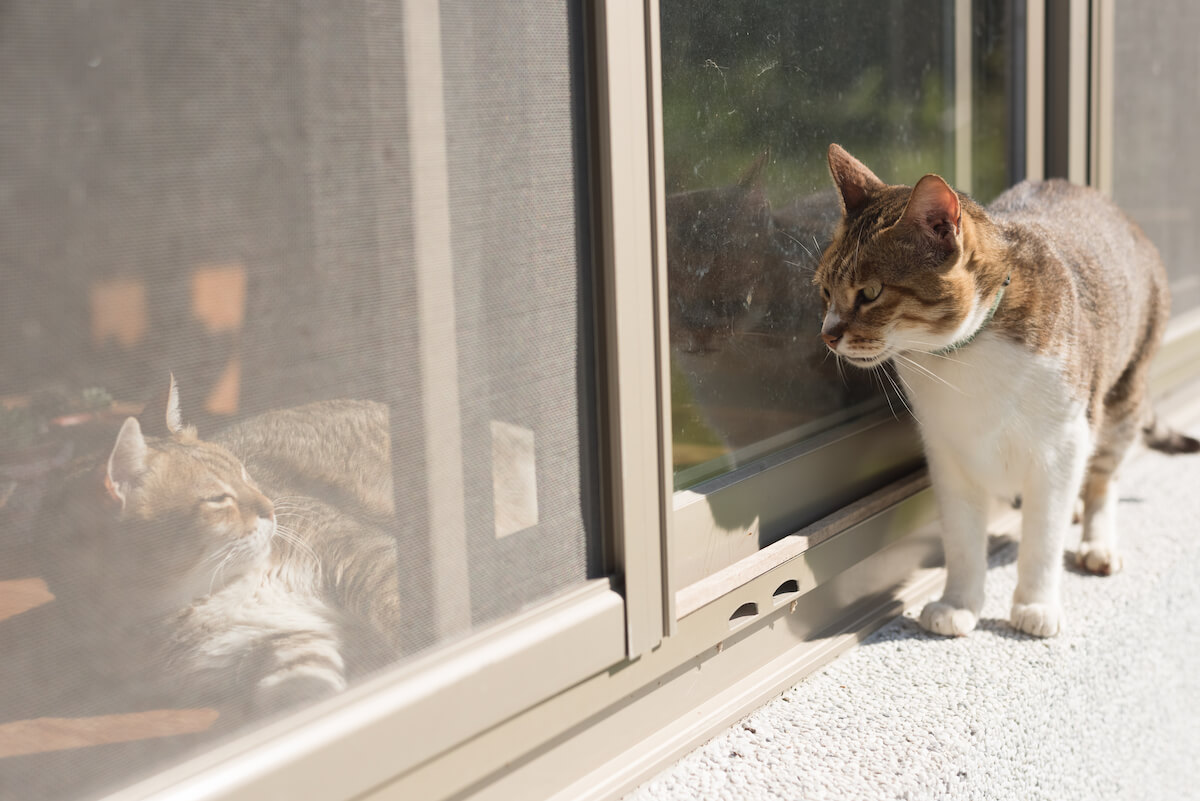 Hang on - is that another cat I see through the window?

There’s a big orange cat walking along our garden fence and Cassie cat doesn’t look too pleased! She really likes going outside, but we’re not allowed to go out until we’re older and have visited the vet - apparently we need to have our vaccines before we are allowed outside as they will keep us healthy!

When Cassie cat goes outside, she loves climbing trees and chasing things under bushes. I see her spraying in the garden - she’s making sure that other cats (including that big orange one) know that it’s her territory! There she goes, out through the cat flap and into the garden - she’s seen off that orange cat - and she’s now spraying the bush below the fence, just to make sure her message is clear! I expect she’ll lie down in a cosy sunny corner of the garden soon for a little sleep.

FELIWAY MultiCat is Helping us Get Along!

You know, we may well get on quite well together soon, the three of us. Our human Mummy has just plugged in something called FELIWAY MultiCat and Cassie cat really is beginning to be more chilled out and friendly.

I think we’ll all get along better with FELIWAY MultiCat. Cassie doesn’t seem to hiss at us, and doesn’t seem to be in the way or block us from accessing food and napping spaces since it was plugged in and it makes us feel relaxed, just as we felt when we were with our feline Mummy.

FELIWAY MultiCat encourages constant harmony between your cats and your home, so you can be happy together. See more:

How Cats speak to each other

Cats have their own way to express their feelings, good or bad. Can you guess which is a sign of ...

A Kitty's Point of View: Understanding My Independence!

Meow! A lot of humans think that cats are aloof, but I like to call it being ‘independent’ - after ...

A Kitty's Point of View: Independent Cats! Meow!! Some people think that us cats are a bit aloof ...